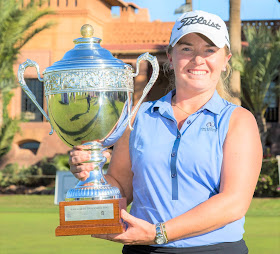 Marrakesh, Morocco – December 20: England’s Bronte Law set a new record at Lalla Aicha Tour School with a winning five-round total of 26-under-par 334.
After rounds of 70, 71, 62, 64 and 67, she finished one stroke ahead of Sweden’s Linnea Ström, who ended with a final round of 66 at Amelkis Golf Club in Marrakesh.
Law, a 23-year-old former Curtis Cup amateur international from Stockport, who earned 3,800 euros for her impressive victory, said later:
“I’m very happy. I played some very good golf this week and coming into it, I hadn’t had much time to practise and prepare due to having an injury.
"I worked my way into the week and playing some good golf in the end was really nice. I’m definitely looking forward to next year and building on this experience.
"It means a lot, coming from England, even though I live in the  United States now. This is my home and it’s important to support the Ladies European Tour and I look forward to being a member of the Tour.”
Law started her final round by sinking a 15-footer for birdie on the first hole and then made a tricky six footer for another gain on the fifth, before hitting a wedge to within tap-in distance on the sixth.
Her next birdie came on the eighth, where she converted a putt from eight feet. After 41 holes without a bogey, she dropped her only shot of the day on the 10th, where she three-putted, but then almost made a hole-in-one at the 13th.
Another birdie followed on the 14th, where Bronte tapped-in for a total of 26-under.  After making great putts on 15, 16 and 17, which all burned the edge of the hole, she found the bushes left of the fairway from the 18th tee and had to chip out, but she reached the green in three and had two putts for the win.
Qualifying for next year’s European Solheim Cup team is now a priority and she added: “That’s something that I really want to be a part of. I love team golf, always have, and there’s something about match play that I really enjoy. It will absolutely be my goal next year to make sure that I’m on that team.”
Next year’s European Solheim Cup captain Catriona Matthew commented:
“It was great to see Bronte commit to going to Q-School and furthermore have such a successful week. She has been on my radar for selection for a while now and playing this week shows her commitment to the LET and as a consequence of that being eligible to represent Team Europe at Gleneagles next year.”
Ström, 23, from Hovas, another strong Solheim Cup prospect, commented: “Of course I wanted to win today, but Bronte played well as always and I knew that it would be a tough last day. I didn’t really get my putts dropping at the beginning of the round and I finished off with four straight birdies, so I gave it a shot, but overall I’m very happy with my game.”
Germany’s Esther Henseleit finished in third on 18-under-par after a final round of 64, which included nine birdies and one bogey. The 20-year-old from Hamburg commented: “It means a lot. I was an amateur and now I will turn professional and that’s just amazing! That was my big goal for this year and it’s a great end to a great season.”
England’s Sian Evans, 27, who works full-time as a PGA professional at Kings Hill Golf Club in Kent, finished in fourth place on 16-under-par. She set up a Just Giving page to fund the trip to Tour School and was slightly tearful after proving to herself that she could mix it with the best.
She said: “This has literally the best week I could have asked for and I couldn’t have done it without my caddie, Jake. He’s been my rock this week. I’ve had loads of messages already and I’m so glad I’ve done everyone proud.
"This means the world to me. It’s what everyone dreams of. Ever since I was a little kid I wanted to do this and to shoot 16-under, it’s my lowest tournament score, so I’m just really happy.”
In a play-off against Sarah Nilsson for fifth spot, Ireland’s Leona Maguire holed a 15-foot birdie putt on the first extra hole, the 10th, to secure the fifth and final card in Category 5C.
She said: “I’m delighted. I knew going into the play-off that that one spot would make a huge difference for next year. I’m just delighted that I could birdie it and get that fifth spot. I’m excited to play with some new golfers in new places.
"I think I’ll go home and enjoy Christmas with the family and plan my schedule in the new year. I’d like to win an event.  It will be good to get my first year as a pro under my belt and see where that takes me.”
On a day of travel chaos at London Gatwick airport, Law determined that she would not be missing out on Christmas in Barbados. Whilst she was out on the course, her mum booked her a new flight back to Manchester with a view to travel from there to Gatwick, hoping to fly out to the Caribbean the next day.