hole in final for their first win since 1900 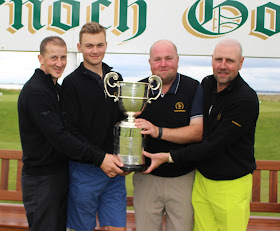 Nairn Dunbar, beaten finalists last year, went one better in the Northern Counties Cup final at Royal Dornoch Golf Club this afternoon.
Graeme Burnett, Willie Barron, Freddie Brown and Brian Watson beat Royal Aberdeen's Mark Halliday, Nick Macandrew, Donald Macandrew and Daniel Sim by two holes to win the prestigious double foursomes club match-play tournament which was first played in 1900.
This is Nairn Dunbar's first Northern Counties Cup success in the past 116 years!
After being four down in the first pairing's tie and four up in the second string's contest after 13 holes, the first pairing for Nairn Dunbar, Burnett and Barron, won the 15th and 16th to halve their deficit to two down, while the Royal Aberdeen 2nd pairing of Donald Macandrew and Sim lost a ball at Foxy, Dornoch's  famous 14th , to go five down. 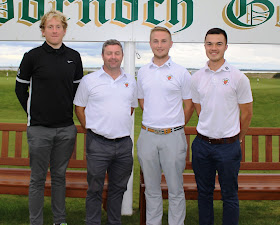